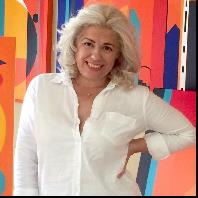 Let us know what you're looking for.

We'll speak with the artist and get back to you with a price quote.

Yamilet SempÃ© was born in Cuba in 1970 (Naturalized American-French). She exiled to France in 1987, where she surrounded herself with renowned French artists.
Her art is collected in countries such as Bahrain, Cuba, Spain, France, Italy and the USA. She splits her time between Florida, USA and Paris, France.

SempÃ© is an artist with several pictorial languages, the best known are abstract and geometric.
One of her peculiarities is her ability to decompose the geometric by taking it to the abstract, always respecting the colors of her palette.
Her overflowing imagination and her fast and sure eye lead her to visualize every second of the palpable and the mystical of everyday life, to capture it in her geometric and abstract work, where we see reflected both the figurative and the spiritual. Her abstract works are inspired by her visions, as dictated by âthe hereafter.â

Since childhood SempÃ© liked to draw nature, (she is a veterinary nurse), her love and passion for animals and plants always aroused her curiosity.
But it was at the age of 46 that she decided to devote her time to painting, a passion that she repressed for many years.
Her first geometric work âCardinal at my Windowâ (Private Collection USA) was the first signal that alerted the artist. The universe sent one more signal - days after creating the work, a cardinal perched on her window.
Another example: the work of great significance is âMoon Dreamsâ (Private collection Bahrain). A figurative geometric work, where the artist paints a black cat looking at the moon, weeks later came a black cat, found at the edge of the sea, her beloved OmalÃ©, who she considers âher protector.â
This is the work of SempÃ©, a succession of signs, esoteric and mystical messages reflected in works such as: Invocation to Pandora, Divine Light, The key of Hecate, The Temple, to cite only some of them.
Throughout the history of art we can find this mystical expression in some painters such as Hilma Af Klint, (founder of the group of the 5 esoteric women following the theosophical ideas of Mme. Blavatsky) â¦, Kandinsky and Mondrian are two other examples â¦ as a common point with SempÃ©: geometry, abstraction and spirituality.
We should also mention that the Bauhaus movement has had an influence on its creation.
A deep personal and spiritual work has led SempÃ© to find fullness in her creation, humbly accepting to be an instrument of creation, always in the tireless search for answers, such as âwaterâ, this element is reflected in her work, âForbidden City."
We can observe the many geometric mandalas on millimeter paper drawn by SempÃ©, convinced of the great healing power of these works, inspired by the mystical painter and healer Emma Kunz. These mandalas are, today, considered one of the therapeutic healing methods.
The colors that SempÃ© uses are not by chance, always present the orange that denotes enthusiasm and passion; Kandinsky says that orange arouses feelings of strength, energy, ambition, joy and triumph. Characteristic features of the personality of the artist SempÃ©.
We also notice circles in her works that represent the Rose of Jericho (the artistâs favorite flower), symbolizing the phoenix in the plant world, convinced that art, nature and life are strongly connected.
âI am only an instrument of the creatorâ she says. During her creation she comes into contact with her spiritual guides, as in a trance state, then works quickly and safely without changing a single stroke.

This artist is beloved by many collectors across the country, however they do not have any comments here yet. Questions? Email us at info@ugallery.com.